The "not so" lion cut for Oliver

He is a Maine Coon and his name is Oliver. He is a big, sweet loving cat! The vet estimates him to be around 6 years old. We are in love with him! 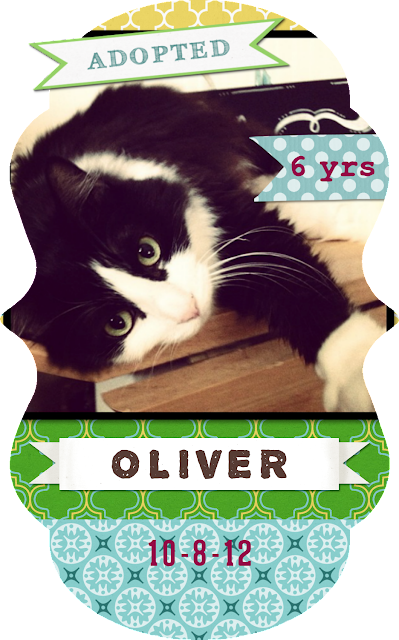 Here are some more pictures of our Love bug! 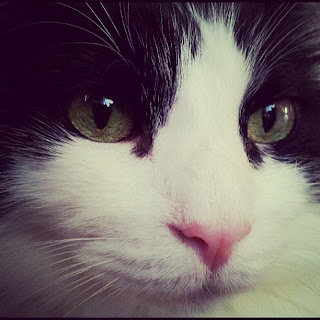 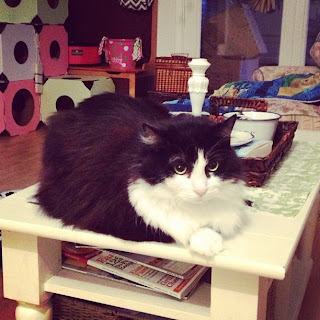 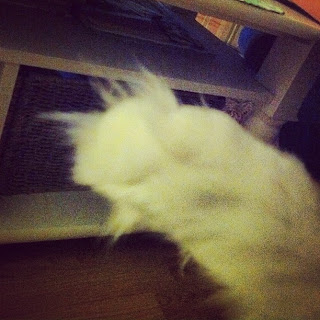 Look at that PAW!

So... Oliver has a skin condition. I have no idea what it is, but I wanted to get him into the vet immediately to find out and treat it.

I did some research and I came to the conclusion that it would be best to take him in to get a "Lion cut" and it would be easier to diagnose and treat the skin condition. Plus, I had ulterior motives...lol. Take a look at some of these pictures of adorable kitties with Lion cuts! 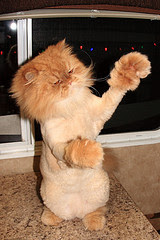 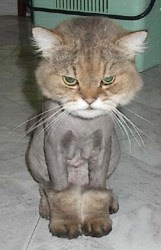 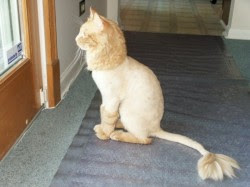 (I got these photos from Google images)

So, since I was taking Libby in to get spayed, I also made an appt. for Oliver to get a lion cut. They informed me that he would be sedated to get shaved. Ok. They also informed me that in order for him to be groomed he would have to have a Feline leukemia test, as well as a Feline leukemia vaccination. He would also have to have a rabies shot. Fine. Let's do this. I was ready for him to get the lion cut and start treating his skin condition.

I drop off Libby and Oliver Monday morning at 8:00.

I take my son with me to get Oliver around 4:30 Monday afternoon. We talk with the vet and he says that the skin condition is actually healing, it probably was due to him having fleas at one time, however, there were no signs of fleas now. Yay, great. I asked if he was grumpy and he said, "No, he did fine. He didn't even have to be sedated." So, I was thinking that I must have the best cat ever because he didn't have to be sedated to get shaved. Whoop whoop.

I paid the bill. $132.00. OUCH. Ugh. I was quoted $55 (including sedation), but....I know they had to do some testing and vaccinations that weren't included in the original cost. Those are the rules for the grooming dept.

They brought Oliver out to us in his carrier and we went outside. While we were still in the parking lot, I told Brian to get Oliver out because I wanted to give him love and see how he looked with his spiffy new hair cut. 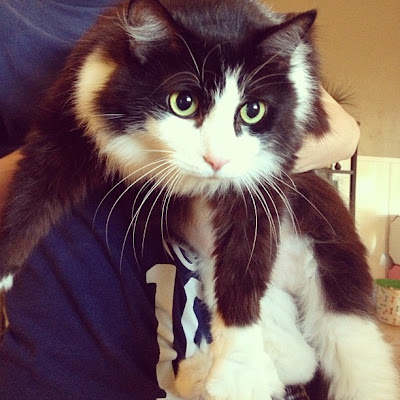 You aren't ready for this-- 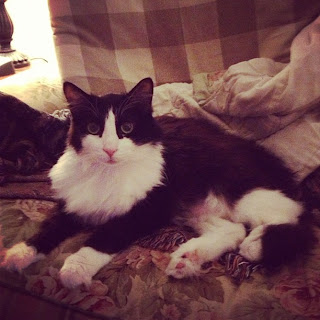 Wait. What? What happened?

Clearly, no shaving happened to this cat. So...I am sitting in the parking lot of the vet's office and I am a little confused (to say the least.)

I march back in, sat him on the counter and asked. "Ummm, what happened to the lion cut?"

The receptionist immediately knew that something had gone wrong somewhere. She called the groomer up to the front desk. The groomer stated, "I didn't know he was getting a lion cut, but I gave him a bath. It's been really busy around here today."

OOOOOHHHHH K. How do you forget to SHAVE A CAT!!! Oh, and how do you charge me $132 when all the cat got was a BATH!!!!! I took him in to get a LION CUT, and to have the vet look at his skin. I would have never NEVER paid that much money for a bath. If I just wanted his skin looked at and no cut, I would not have had to pay for all the extra vaccinations and tests...I would have only had to pay for the vet visit. All of that extra stuff I had to pay was because they wouldn't groom him without proof that he had those things done.

Alrighty. Then I ask, "Can I go ahead and have him shaved now?" The groomer says, "Sorry, I am all booked up. Maybe you can bring him again later in the week" (while she looked seriously put out that I was upset that she forgot to shave my cat)

That's when I said, "I would like some money back, please."

Just in case you missed that.... she handed me THREE DOLLARS AND TWENTY EIGHT CENTS.

I turned around and walked out. I knew that I was about to lose it. I don't like losing it. I don't like confrontation if I can avoid it. I just walked out with a still wet, and fully furry cat. Oh, and the skin condition I was so worried about, the vet says,"Don't worry about it, it should clear up on it's own. If it doesn't, bring him back in."

So now that I have had time to cool off, I am thinking of calling the vet back and asking them if they will do the lion cut for free. Or, for $3.28.

So tell me, am I way out of line to think that they should do the lion cut? Essentially, they charged me for a lion cut and bath with no sedation (plus all the extra things I had to pay for to even let him enter the grooming room). The money she gave me back was the difference. So, apparently...a lion cut with no sedation only costs $3.28 more than a bath. Really?

I am not asking for any more money back. I will eat the money I had to pay for the tests and vaccinations. I just want the lion cut done.

If I wasn't so irritated this would be so funny.

Wow! If I were you I would have demanded my money back just about every cent of it back (except the money it cost to give him shots and a bath). I guess best thing to do is never do business with them ever again!

I took my persian to a pet groomer last week to get a Lions cut...I felt bad cause she coudln't get sedated and my hubby had to hold her down...but it only cost around 40 dollars and she was a good girl...most of the time lol!

I didn't know vets did Lions cuts until the groomer told me!


*whistle* sorry to hear that happened to you! Oliver is Adorable btw and it's good to see he has a family who loves him! ♥

Did you adopt him from a rescue or shelter? If so, he should have already been tested and received a rabies shot prior to you adopting him.

If it were me, I would definitely question the bill and related services (including vaccinations). If you're not comfortable doing it in person, call them on the phone or send an email. Hopefully they gave you a detailed bill that you can reference.

You definitely should receive a refund in full for the $132. In my experience, if an animal doesn't have a problematic skin condition, it is best to leave them as Mother Nature intended, with hair, especially a cat. Cute or not, the hair is there for protection from sun and dirt and bugs, and also for warmth/cooling. (Just like insulation in a home, the hair helps the body regulate temperature.)

This is a time to assert your rights, and I would look into a report to the Better Business Bureau if they do not want to work with you. This is something a reputable business wouldn't do to a valued client.

I am so sorry for your troubles, but I have to admit I did giggle quite a bit at your story. However, I would do as the others have said, and call. Face to face is sometimes difficult without losing your cool, but an email or phone call to the proper person at that business is a definite must! My guess is the person in charge is not aware of what happened and the receptionist did not know what to do. Make a call, it SHOULD be well worth it!
Good Luck.

I'd definitely request a refund or for them to give Oliver the lion cut. The receptionist should have corrected the situation right then and there. I can somewhat understand how the lion cut was overlooked because the vet side and the grooming side don't always communicate well. However, the business should take care of the problem. Can't wait to hear an update to this story. :)

I am soooooooo with KAT!! I would NO WAY make this poor baby that you adopted go through the stress of a Lion Cut. I wouldn't do a Lion Cut on ANY cat but doing it on one that was just adopted and God knows what it has been through? NO WAY!

In my opinion the mix up was God intervening saying DO NOT shave this poor cat!

My Cody has allergies (which is probably what Oliver has)...it is treated with an antibiotic and Prednisone.....(depending on what the allergy is) Cody has food allergies and can only eat Royal Canin rabbit.

Please do NOT shave this poor cat! I also would NEVER sedate a cat unless it was required for a medical procedure.

Wishing you would follow our blog, Cat Chat if you aren't already. I have posts in my archives that might help you.

Wow not good customer service. That was funny the way you wrote the post, I was all ready to see the lion cut photo...and then....disappointment.

Well, could have been worse. My cat had a really bad reaction to her rabies shot. Congrats on the adoption.

Promote Your Page Too
@mrscrazy22